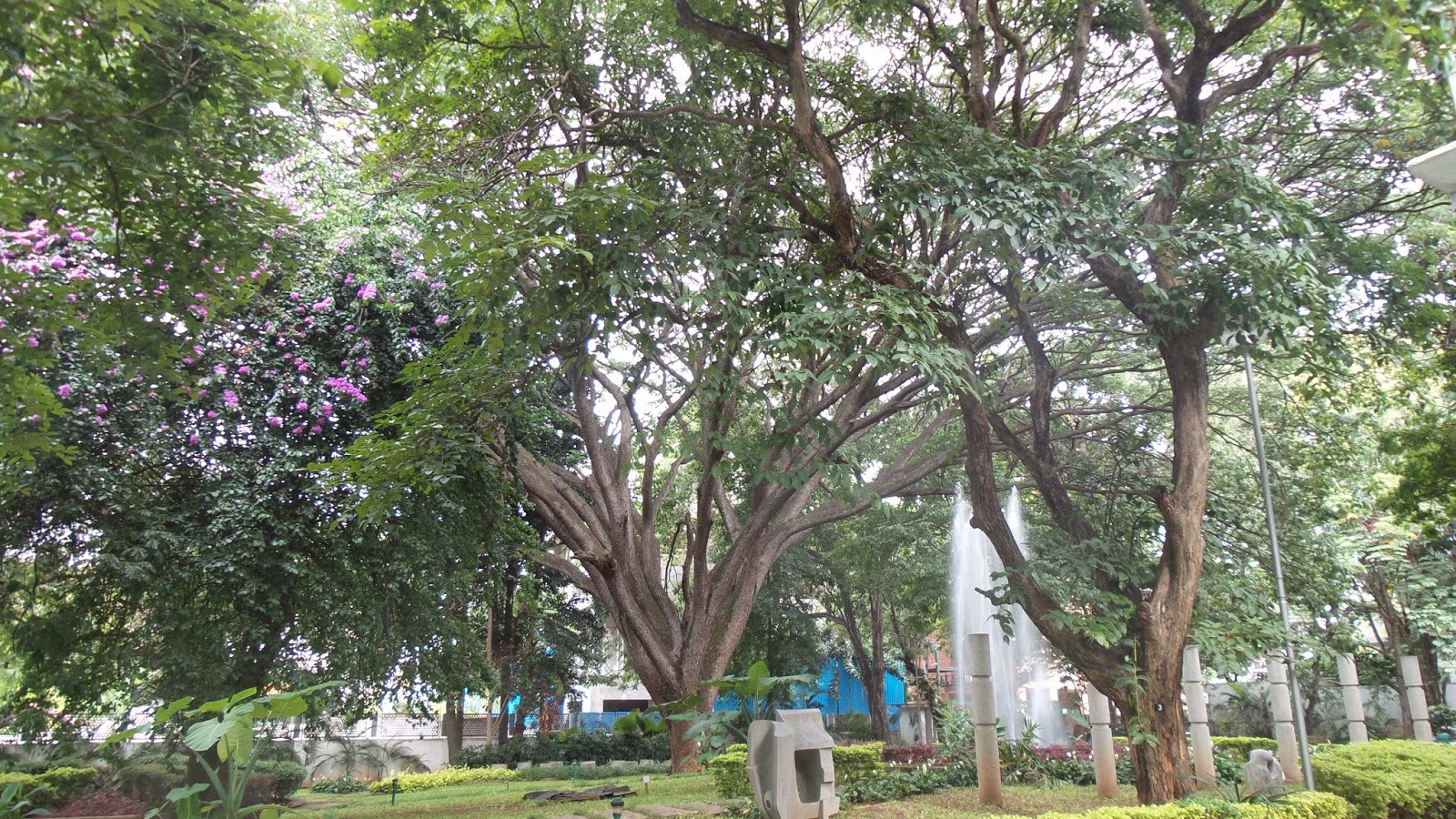 I visited the National Gallery of Modern Art last Sunday. Getting there was interesting. Thanks to my niece's somewhat convoluted sense of direction, I got to see many roads and lanes that I'd never before had the opportunity to drive down. No complaints, though. When we arrived, this is what we saw: 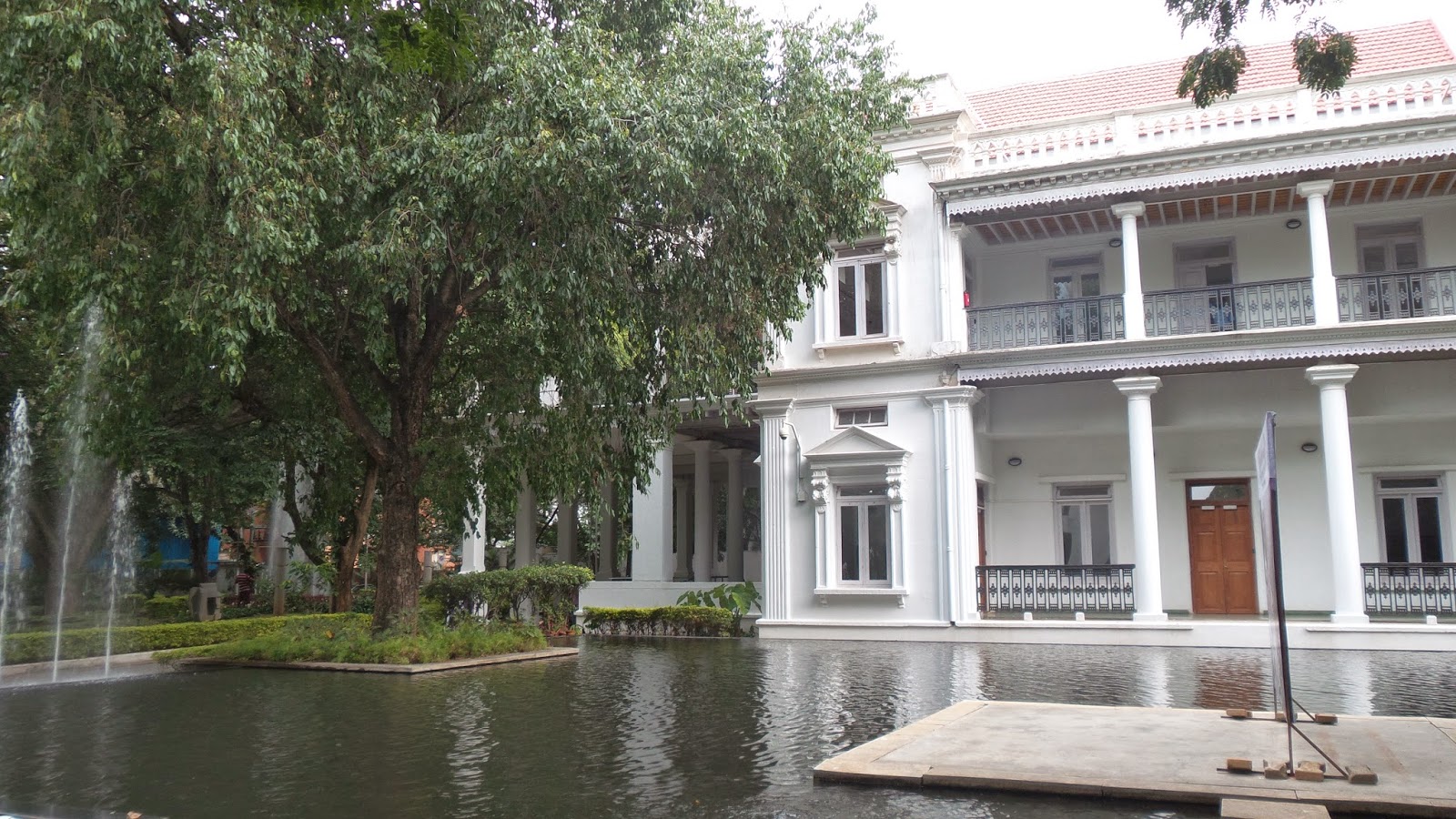 Most of the space here is given to this amazing garden, with wonderful spreading trees and lovely little landscaped niches. The gallery itself is spread out in what apparently used to be some very lucky bastard's house. A Viceroy or something. I'm not sure if this place can technically be termed a house. It was more an unassuming palace. 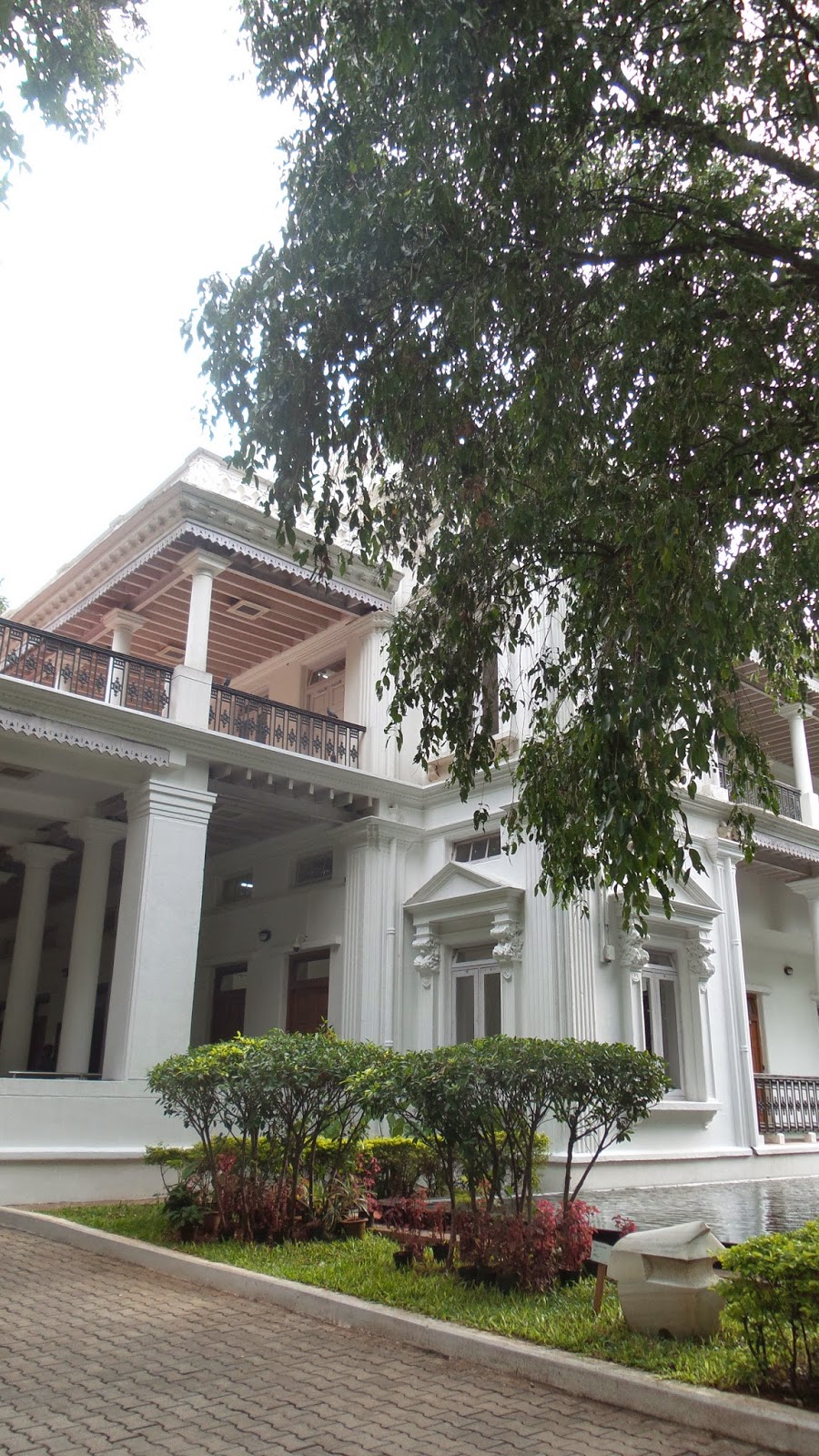 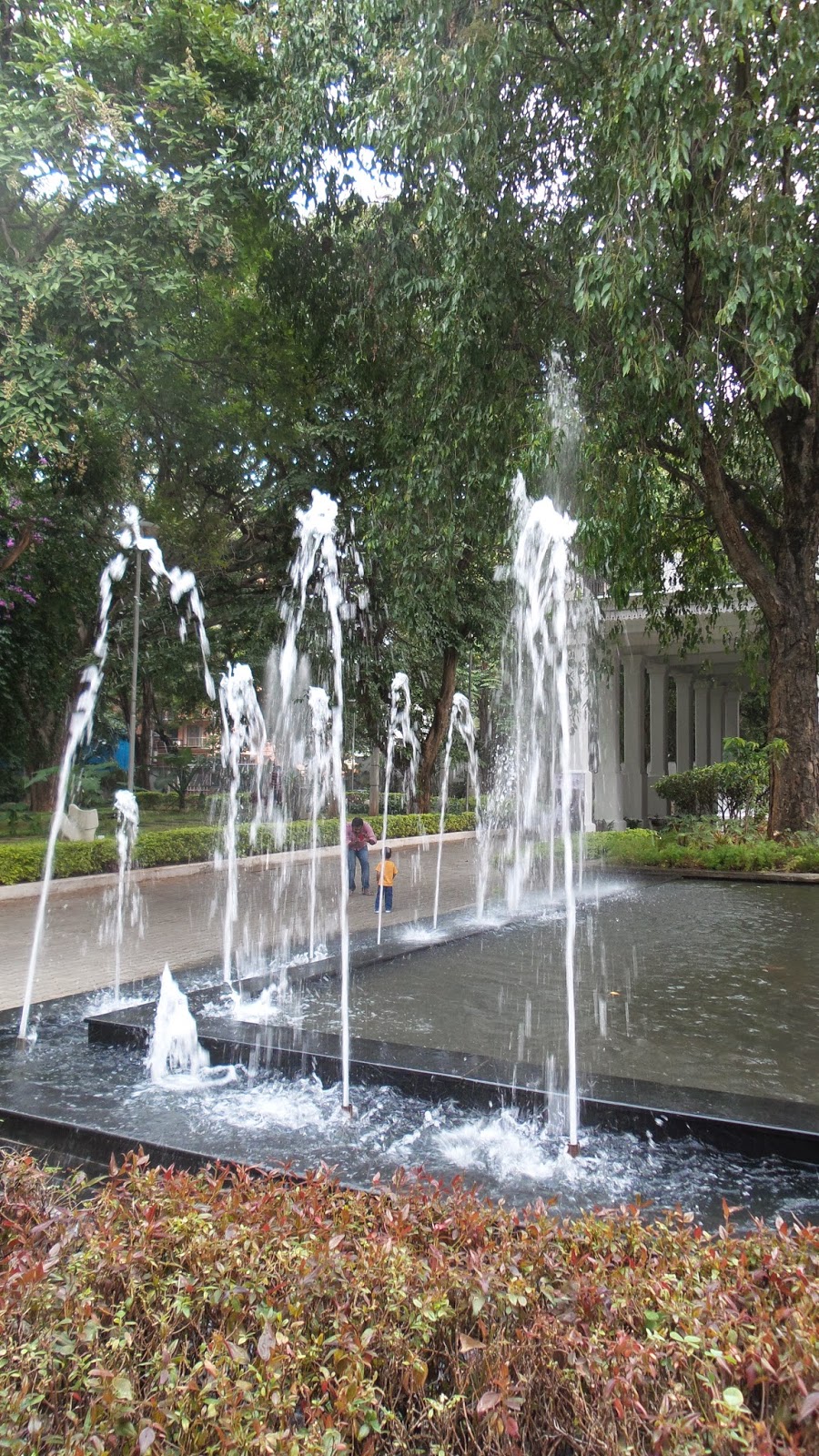 Another lovely aspect of the place was the water. Tanks and fountains, and a soothing sound of water rippling. I can hardly explain how delightful, how exquisite, it was just to stand here.

In between all this beauty, I was intrigued to find some extraordinary lumpy pieces of stone. These turned out to be Modern Art. (That lump at the bottom right of the photo on your left? It's a bird.)

It did not bode well. But we were pleasantly surprised/relieved to find that we had arrived in time for what turned out to be quite a fascinating exhibit:  photographs from the 19th century. No photography allowed (but of course) so I made do with a photograph of a photograph on the exhibit banner: 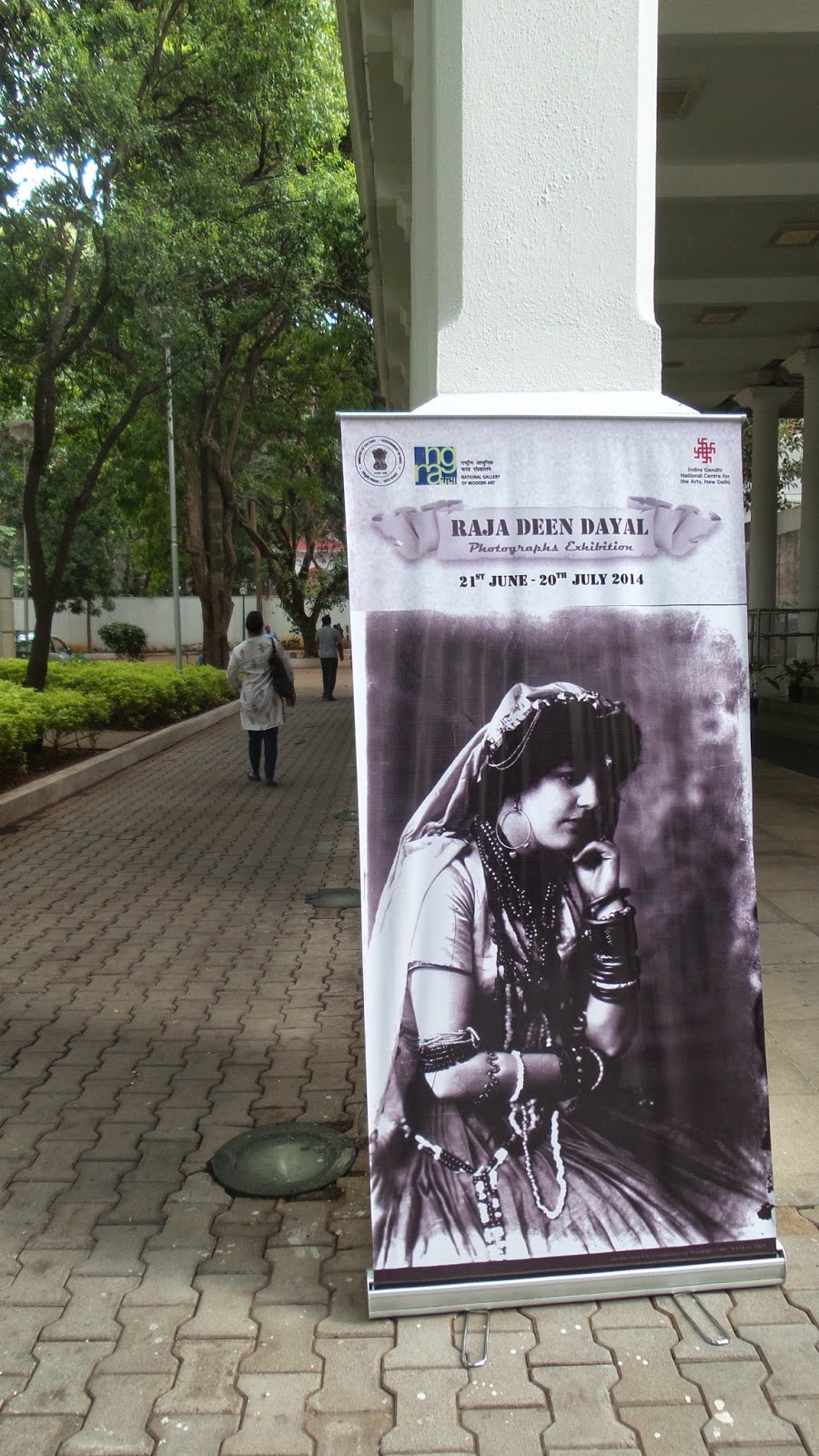 Raja Deen Dayal was, according to a letter of reference that was part of the exhibit, a very nice and clever lad who went from being a studio photographer to being the court photographer for the Nizam of Hyderabad.

That's not him in the photo.

The exhibit was wonderful:  so many great photographs with stories just clamouring to get out. Lots of maharajahs, some of whom looked quite dissipated. Lots of brocade and carpet and curly-tipped shoes. Some breathtaking shots of historic architecture around India.

Like all good things, this too passed. In a half reverie, we walked on to other halls and to a rather rude awakening by the type of modern art that I always think of when I hear the term Modern Art.

I found two and a half paintings that I liked. (The two were by an Anupam Sood, and the half was the top half of a painting by I-forget-who, some lovely monochromatic ravens who fortunately would never have known that they shared a canvas with a line drawing of a rather grotesque woman, or perhaps it was a man.)

Oh. Perhaps that was the point of her (I-forget-who's) painting. The smooth flowing brush strokes of the raven contrasting with the Parkinson's diseasey quivering inked lines of the human. A Deeper Meaning, no doubt.

We ended with a stroll down to the gallery's horribly disappointing cafe. Another contrast! But perhaps without any deeper meaning. It could have been beautiful, but instead it looked like some little tea stand you'd find at the bus depot. And so we left. But not entirely disappointed. As we headed to the parking lot, I found Mr. M. Jayaram and convinced him to pose for me. I wouldn't let him stand at attention, so instead he sat at it. I love this picture! 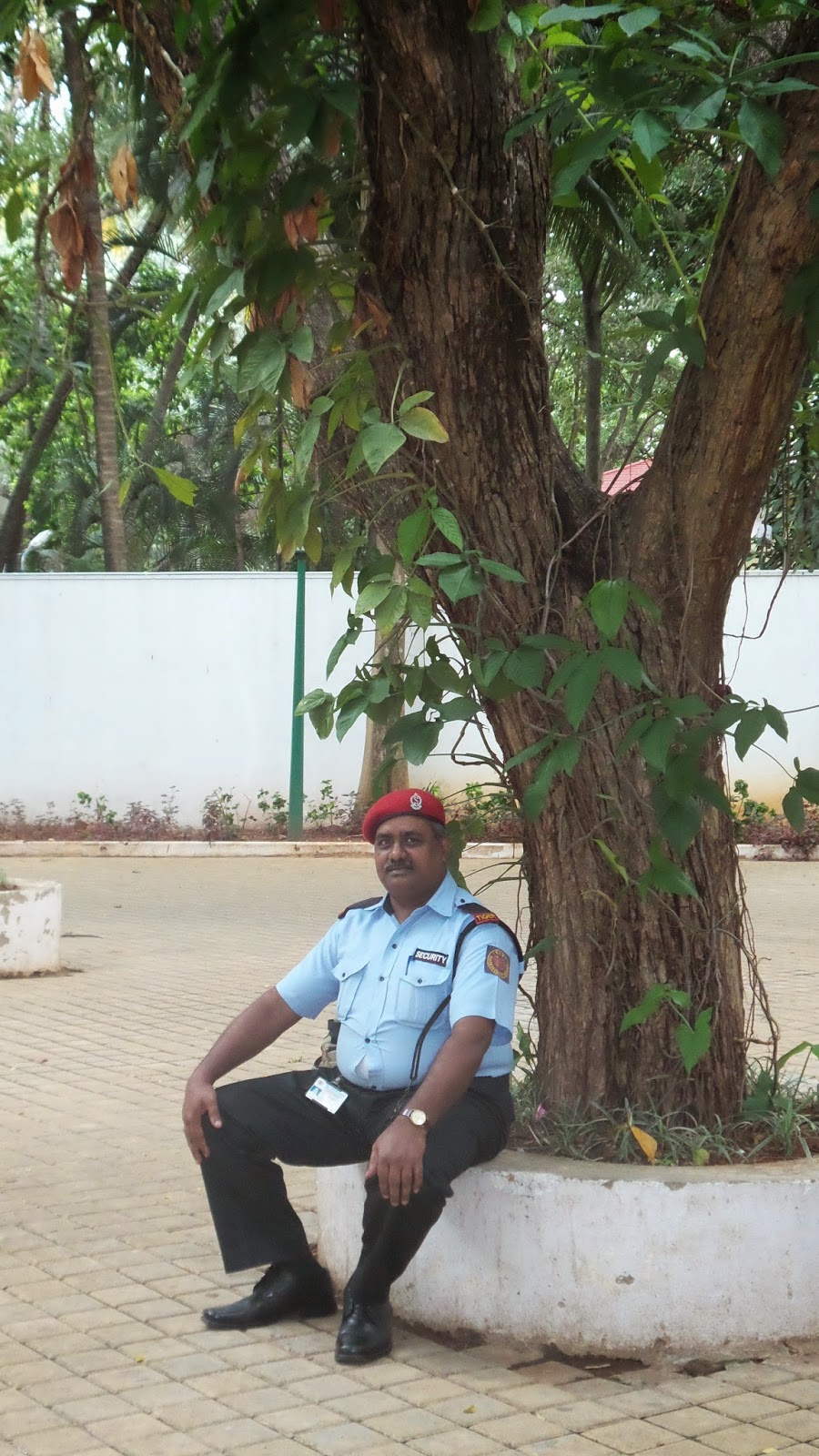 Thoroughly enjoyable. It brought more than a smile to my rather monotonous working day!