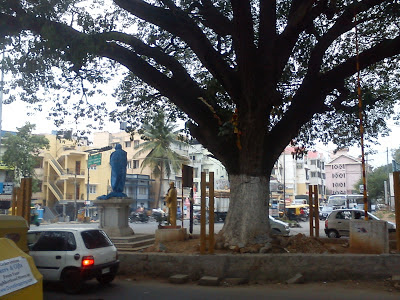 Every time I go to Nanjappa Circle, I'm bugged by this
mysterious figurine wrapped in blue plastic. Its contours echo
those of a smaller statue just behind it, which has been painted gold.

All I knew was that these were statues of "Ambedkar". They've
been there forever (well, a year at least). So I turned to my
personal guru and said, "Oh Google! Tell me! Who is this man?
And why has he been blue for so long?" And this is what she told me.
All of which made him, to me, fascinating. I wanted to find out
more about the man hidden behind the blue plastic wraps. And
it struck me - find about the blue plastic wraps themselves.
Back to my guru I went, this time to learn not about the man,
but about the statue/s up at Nanjappa Circle.

On March 29th, 2010, newspapers reported that Dr Ambedkar's
statue at Nanjappa Circle had been toppled over, outraging
the Dalit community. (Back then there was only one statue,
made of plaster-of-paris, since stood back up and painted gold).
This statue of his now stands in the shadow of the new
blue-wrapped one. It shall never be toppled again. It now
has his feet firmly encased in cement up to his ankles for protection.

This statue-toppling is the sort of senseless act that normally
leads to communal violence, but fortunately, there was none
(that I know of). The municipal (BBMP) elections were being
held that day, and though there doesn't seem to be any logic to it,
I can only assume that someone intended to benefit from this act
and the feelings it would arouse.

Who did this? We may never know for sure, but the papers
assured us that they were MISCREANTS! A very popular noun
in Bangalore newspapers, another word for "rowdy elements"
or "mischief-mongers"). Or perhaps political party supporters,
as I believe all the major political parties accused their
opponents' supporters - Miscreants! Oh, you Naughty Miscreants, you! -
of being behind this HEINOUS act of GOONDA-ISM (two other
popular words in a crime reporter's vocabulary).

Anyhoo. In time, a second statue appeared. The BBMP approved
two Work Orders. One for the construction of a new statue
at the cost of six lakh rupees (Rs 600,00/-), and one for
the construction of a pedestal and ornamental grill at four lakh
rupees (Rs 400,000/-). I looked up their impressive-sounding
"Global Project Management System With Remote Eye Monitoring System" page,
but beyond the Estimated and Approved Cost and the name
of the Chief Engineer, every other entry just reads "0". (That's
a zero, not an oh. Although an oh would work there too, with
either an exclamation or a question mark, as the situation requires).

So no clues as to whether they consider the work finished,
or if they ran out of funds, or anything.

Well, the new statue is up, at any rate. Standing high on its
four-lakh pedestal (and the ornamental grills, let's not forget those.
They could do with some painting, by the way). It might be
a bronze statue, we do not know yet. Those plastic blue wraps
have been firmly affixed to withstand both monsoon and miscreant,
and what lies underneath is yet to be unveiled, nearly two years
after the first statue was toppled.

Dr Ambedkar's death anniversary is coming up on December 6th.
I'm hoping that the long-awaited unveiling will be held then,
a symbolic rebirth. If not, we can pin our hopes on next April 14th,
the day of his birth. And if not then, well, let's just wait for the next
election day to roll around.

Any day now, people. But don't hold your breath. Instead, gaze upon
my really bad photography and read my little poem to pass the time: 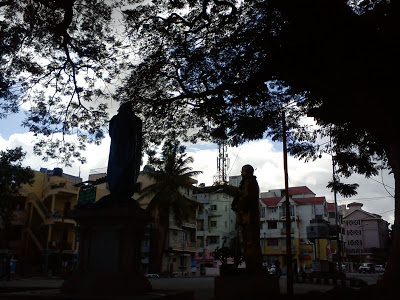 *
Dr Ambedkar, why so blue?
If I was in your place, I guess I'd be too,
Waiting a whole year under wrap
Held in suspense for someone else's crap.

Drs Ambedkar, (for there's not one but two)
I'm sad when I gaze upon both of you.
One year and ten lakhs have gone by so fast.
I'd like to see more of the man who fought caste.

Great blog and post, keep it up i will be subscribing to your feed!