As I typed this title, I was already worrying that in today's crazy
world, people might think this post is about a bomb. Actually,
in more ways than one, it's quite the opposite. Bombs destroy.
This creates and connects.

I went to an exhibit at my favourite art gallery and was absolutely
blown away by it. It was the most creative, clever, endearing and
picturesque exhibit I've seen in a long time. It was beautiful and
simple and it wasn't only art, it was literally "art, earth, ink and soul"!
How could I not love it?

The artist is Chang Yoong Chia of Malaysia. Sadly, I didn't get
a chance to meet him, but am so grateful that I got a chance
to see his work, and just in time too. I managed to catch his
exhibit, The Botany of Desire, just an hour before it closed!

I walked in to the gallery and this is what I first saw. That's
my friend Suresh, leaning against the wall. We went to art
college together. For a year, anyway. Then I dropped out
(refer my darkest poems) while he went on to finish, and later
even became the principal. He was a very principled principal.
The gallery is his, and part of his NGO that supports and
encourages young and upcoming artists - local, national
and international; rural, tribal and urban. He has residencies
and so we get to see the most wonderful variety of art, and meet
the most wonderful variety of creative people.

The photographs I've taken don't really do Chang's work justice
(took them with the camera on my phone!). I couldn't resist
taking a picture of each and every leaf, and I wanted you to
see them all. 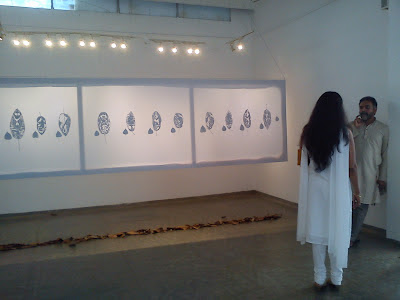 Chang blended Malaysian shadow-work with his experience of
Bangalore - those are actual leaves both on the screen and the floor,
from Lalbagh Botanical Gardens - and created a whimsical fairy tale
of sorts, from what he learned from his early morning walks there. 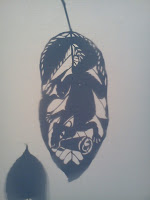 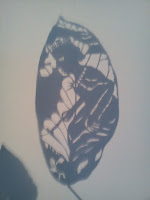 These are close-ups of two of the leaves. What you see is the silhouette
of the cut-out leaf, backlit. I thought they were quite lovely enough
as they were, but then Suresh walked me behind the screen. That's
when I got blown away - here is Chang's story, in pictures, in words,
on leaves. Enjoy!


Aren't they lovely? Everything about them enchants me. The skill
of the cut-work on the leaves, the style of the illustrations, the story.
I love the way Chang brings in little nuances of Bangalore
life  - early mornings in Lalbagh (the gates open at 5 a.m.
for walkers, joggers, and yoga enthusiasts) - parents going
for broke over the obscenely lavish Indian wedding - the history
of the tree - the call centre - the squirrel and the Brahmani kite.

My favourite leaves are the squirrel, the queen and the call centre.
Which are yours?

My favourite part of the story, though, is the last leaf. I can't wait
for Chang to come back and tell us more.

Wow, that work is amazing! I was just at an art fair today. Actually it used to be principally "craft" art but it's moved more to high art. Nothing like Chang's work though.

Thanks Nazu,this is a gift for our friendship.Just to tell the world that Nazu is snail hiding in her shell and is also a creative bombshell,she just needs to explode and blow us all away.Keep ticking and get your self here more often.Have a show here too!It is an invitation and challenge.Go for it!