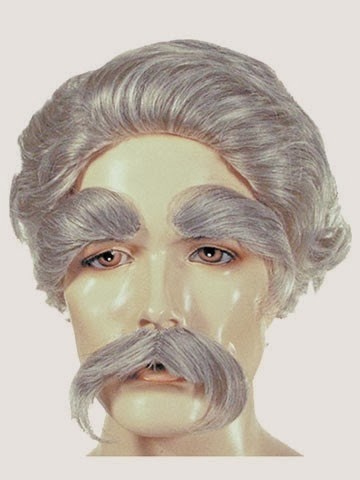 Like most people, I just thought Mark Twain wrote about Huckleberry Finn and Tom Sawyer. Just seeing those names now, in my mind’s eye I can still spy Huck wading through weeds and water, still watch Tom painting that fence. Can't you?

Mostly, I thought Mark Twain lived a charmed life, travelling around the world, or ruminating on steamers and thinking up funny things to say. More recently, I realised that not everything he thought up was funny, and that much of what he thought – and said – and then wrote – was serious.

Perhaps even then, people had already labelled him the funny guy, or perhaps he was just being cautious, and wanted to ensure his continued survival in a tribe
where applauding sycophants can easily turn into hostile executioners when
they feel their idea of the world has been threatened.

His War Prayer wrenched my heart, and you can watch a short film made of it here.

That’s a rhetorical question. I fancy I already know the answer. The hero of this story
is Satan, and the story itself is told to his fellow angels Michael and Gabriel, through
a series of letters in which he describes what he sees on a visit to our planet. It’s a probably
painful dig at traditional beliefs of who we are and where we come from.

But isn’t pain a part of life, an important part that leads to growth or escape from danger?
And aren’t we encouraged in schools and universities to study, explore, think for ourselves,
question, search, learn, grow, challenge and be open to different perspectives?

Letters From The Earth is a good piece of writing that one may see as a pleasant fiction
or an awful challenge or even a blasphemous piece of shit. My point in writing here
about it, is that somewhere, somewhen, someone did us wrong by shoving it
on the topmost shelf of the furthest bookcase of the library of human writing. I share
the information that this piece of writing exists, so that more people may have
the opportunity to know that it was here all along, and perhaps read it themselves.
I feel fuller for having read it, and don’t I say that this blog is about the things
that save my life?

A Connecticut Yankee in King Arthur's Court is one of his best, but The Prince and the Pauper is probably my favorite. I am going to read Letters from the Earth in the morning. I hadn't heard of that one, either and I'm sure you are right on target with the reason why. I just found your blog. I'm enjoying it! Thanks for sharing.

Thanks for visiting Karla, and nice to meet a fellow Twainer! I read A Connecticut Yankee decades ago, I remember loving it and now I'm thinking I must read it again!

PS I visited Arizona once! Whenever I hear the word I see those beautiful orange rock formations in my mind .. contrasting with the green cacti ..