The sky does things to me. Today it almost made me weep, it was
so magical and awesome (in the true sense of that word, not the one
that's accompanied by "dude").

I was up on the roof for my evening walk (down 2 kg, people!)
and suddenly the sky over the nearby graveyard was filled with kites.
The kites I saw today were all pariah kites - their feathers more grey
than brown, not the woody rust wingspan and white head of the Brahmani kite. 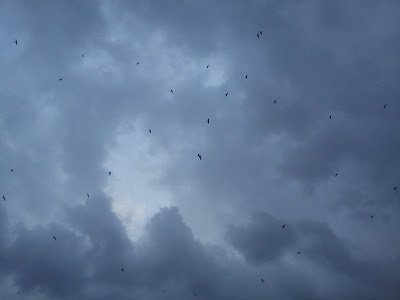 The graveyard is an old British one, with enormous rain trees
and mahogany trees. The kites live in the rain trees. They were all
up in the air, soaring, gliding, sometimes even seeming to defy
gravity:  struggling to stay still against some invisible air current.
It was magnificent. I couldn't keep walking, I just had to lift my
head and watch them. My neck ached but I could not stop, it was
as though I had connected with them.

Suddenly they were swooping one by one right above me,
just about 25 feet over my head. I could see their feathers
ruffling in the wind, could see their heads pivot this way
and that. It was as if they knew I was there, that I envied them
their flight, and they shared the experience with me as best
as they knew how. They saw that I saw them, really saw them,
and so they came to see me. I felt so honoured, and humbled.
And so, so blessed.

As I watched, the call to prayer rose from nearby mosques,
and it struck me that just like the men bowing their heads
to the floor, perhaps these kites were offering up their
evening prayer too, their flight some outpouring of unbearable
joy - for the beauty of the sky around them,
for the oranges and purples and peaches of the sinking sunlight,
for the crisp wind, for the ability to fly, for life!

Watching them, and the majesty of the sky, I suddenly felt
as though the pariah here was me.