Yes, I have finally made a timid venture into the realm of art
collecting. Don't get too excited. And don't make plans to raid
my home when I'm out. I haven't bought anything over
a thousand rupees (that's like twenty US dollars). I have no
intention of being one of those people who "invest" in art.
I am a "cheap and best" person. And any art I collect will
be art that speaks to me.

This is what spoke to me on Saturday evening: 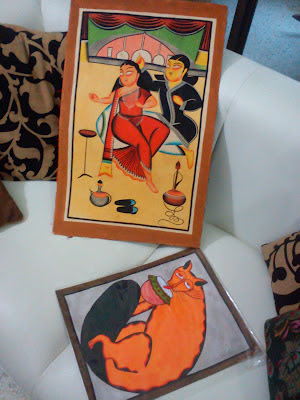 I had gone to 1 Shanthi Road for a performance and art exhibition
by Khadu and Radha Chitrakar, two folk artists from Bengal.
The art form, called Patachitra (painting on cloth), was
the quaintest exercise in multi-tasking that I've seen in a long
time. It's painting, composing, singing, story-telling, literally
rolled into one.

Long painted scrolls reveal a story - either one long image,
or a series of frames, almost like a comic strip. The artist sings
as she (or he) holds up the scroll to the audience, pointing out
characters on the scroll as s/he sings about them, and slowly
rolling the scroll up in her hands as she goes.

It's the story that sparks of the creative process, that inspires
someone to compose a song. Some of the songs we heard were
composed many years ago, shared and passed down from
one generation of artists to the next. The song then inspires
the painting. Together, they become Patachitra. It's a pity though,
that although the scrolls may go on to dress someone's wall,
the song gets left behind, captured only on video or in a memory.

So I shall never know, when I look at my paintings, the story
of the cat. Did he get the cover off that clay pot? No? Is that
why he looks so resigned to the treat so near and yet so far?
How did he get hold of the pot and what was in it, anyway?
That delicious sweet curd that Bengal is famous for?

And what's with those two Bengali aristocrats? I mean, they
look Indian, but those minarets, the hookah and coffee pot
tell a different story. I shall just have to make my own stories
and sing my own songs when I gaze at my deliciously quirky
paintings. It will be fun. 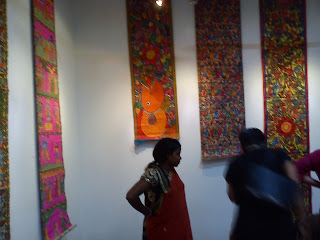 But back to Saturday's performance - their voices weren't the prettiest I've heard, and they weren't fitted out flamboyantly in feathers or beads or festive colours. They just sat there in their everyday clothes, no make-up or special lighting, and they sang their songs and showed their stories. They didn't always stay in pitch or rhythm; they were unfazed at taking a pause to clear their throat with a soft cough. They just did what they do. And it was delightful.

If you haven't already, I'd recommend you zoom in on the pamphlet for a closer read - and a closer look too, at that painting in the middle. Does it look familiar? (Oh, and Suresh, if you're reading this, thanks. I copied the pamphlet image from your Facebook page).

Many of the Patachitras tell stories of Hindu mythology, tales of gods, goddesses and demons. But the demons in that particular Patachitra are the planes crashing into New York's twin towers. These artists don't limit themselves to tales of ancient traditions. They take in the world around them as it is today, and make it part of their art. You'll find patachitras on a recent flood, on the AIDS issue, the Babri Masjid, and yes, that awful day one long ago September.

I couldn't follow all the words when they sang this Patachitra (apart from the occasional "Boosh" and "Laden") but after they were done, our host translated the Bengali and explained the story that told, and showed, the planes, the towers, the victim's families, the war on Afghanistan, and finally Osama Bin Laden sitting cross-legged in a cave! And the theme that ran through the song was the question that so many of us must have asked the world over:  Why? Why did so many people have to die?

They ask good questions. And they answer difficult ones too. Khadu, Radha and their daughter Rabia (that's her in the picture with the hanging scrolls) - who sang to us about everything from a fish's wedding, the 9/11 attack, a snake-goddess, and a story from the Ramayana - are Muslims.They just do what they do. And it is delightful.

You should definitely create a story for your new artwork and put it to music, record it and when the art is displayed, keep a little recorder near it, with a note saying, "play me".

Wouldn't you love to go to someone's house and discover an experience like that available to you? It's like every guest to your home is getting a gift, a shared experience of you.

I've had a think about it, Nari, and my think (or is it thunk) was that what would be even more fun would be to make up a story and sing it - together with a guest.