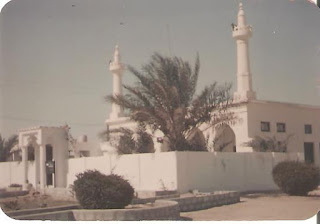 I have been collecting old photographs that my father took throughout his life. At first I thought of creating a separate blog for them, but it seems like too much of a hassle! So I've decided to share them here, as everyone knows this blog already.

This picture was taken by Daddy, probably in the late 50s or early 60s.

The Al-Khamis mosque is the oldest mosque in Bahrain, and one of the oldest in the Arab world. The original mosque was thought to be built around 692 C.E. (that's Common Era, in case you were wondering, I prefer not to use the outdated/inappropriate "A.D." which stands for Anno Domini and means "in the year of our lord"). However, an inscription found on the site suggests the foundation dates back to the 11th century.

A mihrab slab found there dates back to the 12th century. The mihrab is a slab of stone (limestone, in this case) that is placed in mosques to indicate "qibla", the direction in which Muslims face to pray, i.e. in the direction of the Ka'aba in Mecca. On the mihrab at the Al Khamis mosque is an inscription of verses 34 and 35 from chapter 21 of the Qur'an.

I have driven past this mosque many thousands of times for the first thirty-odd years of my life, but never thought of going inside. Now I wish I had. I'm not sure visitors are allowed right inside, anyway, perhaps just in the courtyard area where I believe there are also ancient gravestones.

But .. I often dream of this mosque, of climbing up a narrow rough winding staircase of limestone, and going up to the top of the minaret. Everything is chalk white and cool and still. It's one of my favourite dreams about Bahrain, and is just as good, if not better, than a memory!