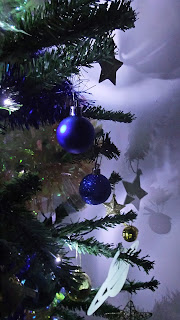 They say there is a star, a Christmas star. It is filled with light. It brings a message of hope. It inspires those it touches to be more than they dream. It draws, like tide, the inner courage to do more than they dare.

I know it as a myth. There is no such star. We have searched galaxies, the scientists and I, and never found it. We have scoured books and histories and never caught an echo.

Still, Christmas is around the corner and it's time to sing.

So I went to a Christmas concert at a retirement home, to watch my friend lead a choir of eighty- and ninety-year-olds. I watched her coax them into performing solos, words and melodies painstakingly memorised, into giving it their all, and they did.

I know her voice well enough to be able to hear her sing along with them. Hers is a beautiful powerful voice that could fill a hall on its own strength, but not tonight. Tonight she sang gently and softly, just loud enough to guide and support them, as they put on the show.

I watched them sing. They sang about that star, the one that does not exist. The one that disobeys the laws of physics, and follows donkeys on desert nights.

I have the facts. I could have turned aside with a smirk, but I looked at my friend instead. I watched her touch, inspire and love them.

I looked at her face, and I found the Christmas star there.